Granger, located between Zillah and Sunnyside in the Yakima Valley, was named for Walter Granger (1855-1930), who helped irrigate and promote the region beginning in the 1890s. The town incorporated in 1909, and in recent years has become known as the place “where dinosaurs roam.”

An Oasis in the Desert

For centuries, Yakama Indians camped near the confluence of Satus Creek and the Yakima River, a few miles southeast of what is now Granger. After the tribe was forced to cede its lands when its leaders reluctantly signed the 1855 Walla Walla Treaty, tribal members moved onto the Yakama Reservation. This opened up the Yakima River valley for settlement.

In the 1870s, the Northern Pacific Railway arrived on land granted to it by the federal government. The grant stipulated that five years after the completion of the transcontinental line, the land would be sold, in order to spur settlement. In the Yakima Valley, the Northern Pacific right-of-way approximately paralleled the Yakima River, on dry desert land — an ecological region technically known as shrub-steppe and dominated by big sagebrush and bluebunch wheatgrass. It was a landscape ripe for irrigation.

In the 1890s, work began on the Sunnyside Canal, an irrigation project begun by Walter Granger and a group of St. Paul, Minnesota, investors. Their corporation — the Yakima Land and Canal Company — scouted for townsites while the canal was being dug. Zillah was founded in 1892, and Sunnyside a year later. Granger and his new bride, Maud Thomas, made Zillah their home.

A Town Is Born

In 1904 the newly formed Granger Land Company established a new town midway between Zillah and Sunnyside, which they named Granger. Thanks to an aggressive ad campaign in Seattle, Tacoma, and Spokane newspapers, scores of people bought homes in Granger. Some of the new residents opened businesses.

Within a few years the town had shops, clothing stores, a hardware store, a bank, a hotel, saloons, a meat market, a bakery, a cannery, a photo gallery, and more. By the end of the decade, Granger had enough residents to incorporate, which it did on September 28, 1909. The first child born in the newly incorporated city was named Walter Granger Nelson. Walter Granger himself presented the baby with a silver engraved cup and spoon.

During its first year after incorporation, Granger gained more than 200 new residents. Many of them were families, and this necessitated the construction of a new four-room schoolhouse, which the town quickly outgrew. A few years later a new high school was built.

Steady work could be found at the Granger Clay Products Company, which had opened a brickyard in 1903. Other newcomers found plenty of available jobs at local farms, which produced asparagus, potatoes, wheat, fruit, beets, hops, and more. Cherries were a popular crop, and Granger later adopted this fruit as its emblem. The town still holds its annual cherry festival every spring.

Other farms bred livestock, and herds of cattle were raised for milk or for meat. Sheep were also popular, and were pastured throughout the valley. Occasionally the sheep caused problems, as when the herd wandered onto train tracks or highways, sometimes causing accidents.

Like many rural cities, Granger fell upon hard times during the Great Depression. One bright spot during those years came from Clay Bell, owner of the Granger Hardware and Furniture store, and also a Justice of the Peace. Bell offered “Guaranteed Weddings” for 39 cents, a stunt which got written up in the pages of Readers Digest. Couples came from miles around for these bargain nuptials.

In 1938, the townsfolk organized a fire department, which had previously been all-volunteer. Granger already had fire hydrants, but nearly half of them were defective. The new fire department fixed the hydrants and bought a fire truck.

The following year, Granger received a big boost when the federal Works Progress Administration (WPA) approved funding to pave the town’s streets. Some $21,000 was spent on the project, and the choking dust stirred up by local drivers became a thing of the past.

The War and Beyond

In 1942, the Granger bridge spanning the Yakima River collapsed, creating a serious problem for those wishing to enter or exit the city from the south. Because of wartime shortages, only material salvaged from demolished bridges could be used to create a replacement. A temporary bridge was built, but its low speed and weight restrictions — and narrow roadway — vexed drivers for 25 years. A concrete span was built in 1967.

During World War II, many of Granger’s young workers joined the armed forces, creating a labor shortage on local farms. In 1942, more than 500 Mexican nationals arrived in the Yakima valley under the federal Emergency Farm Labor program — also known as the Bracero program.

Some of these migrant workers later became citizens, as did family and friends who followed them. Latino settlement flourished in Granger, and today (2013) the town’s population is almost 90 percent Hispanic.

After the brickyard closed in the 1960s due to a depleted clay supply, Granger began to fall on hard times. Also, less work was available on farms. By the 1980s Granger was one of the poorest towns in the state. It was also one of the youngest towns, because of the number of large Hispanic families. In 1990, Granger had 2,053 residents, with a median age of 24.1 years.

More and more people were visiting the Yakima Valley due to its burgeoning wine industry, and  Granger sought a way capitalize on the tourism. Decades earlier, woolly mammoth bones and tusks were unearthed in one of the clay pits, so town officials chose a dinosaur theme to promote their community. Beginning in 1994, townsfolk built dinosaurs out of wire mesh and concrete, and placed them throughout Granger. Each year they add one more during the Dino-in-a-Day festival.

The theme worked, and Granger is now known as the town “where dinosaurs roam.” Hisey Park alone has more than two dozen dinosaur statues, and in 2010, the town dedicated a new amphitheater there for community gatherings. The park’s restrooms are shaped like volcanoes. 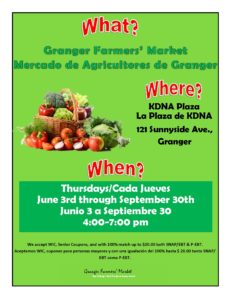