This year the Dino-N-A-Day will be held on Saturday, June 1 at 9:00 am until about Noon at Hisey Park.

Last year’s Dino-n-a-Day was completed June 2, 2018. The Dinosaur created was a Megalosaurus (as was last year’s dinosaur) and they are going to replace the dinosaurs at the entrance into Granger by the Hisey Park, Main St. & HWY 223. 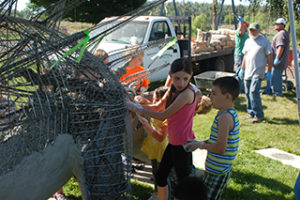